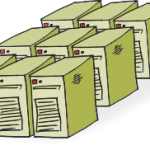 Most small town or local web hosts do not operate their own datacenter. Most of the time your web host has an agreement with either a larger web host or directly with a datacenter operator. This agreement maybe for renting dedicated servers or for colocating equipment.

The servers your web host would rent or lease are owned either by the upstream ISP or the datacenter operator. Your web host would resell the resources on these dedicated servers to local customers, like yourself. The number of servers being rented may range from a few dozen to hundreds.

Placing equipment inside a leading datacenter